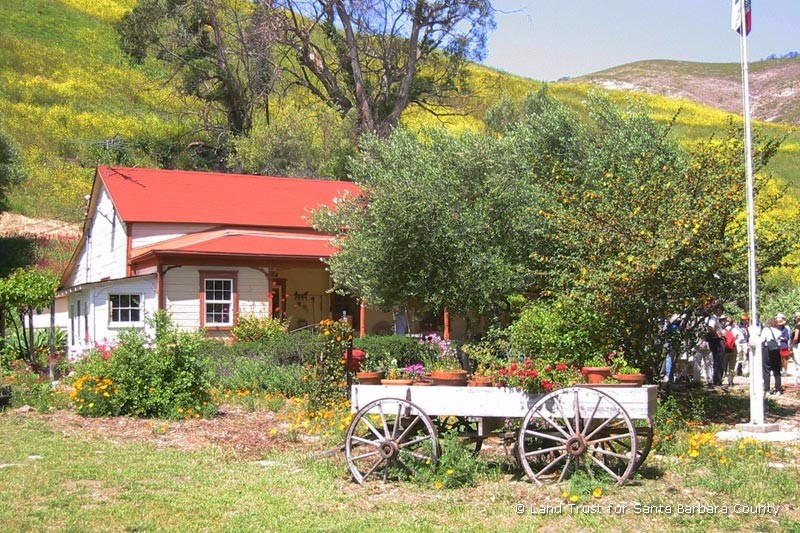 Previous Next
Things to Do Categories: Heritage Places of Interest

The earliest known inhabitants of Arroyo Hondo are from the Barbareno-Chumash civilization 5,000 years ago. Evidence of a permanent Chumash camp has been discovered buried deep in the lower canyon.

Rancho Arroyo Hondo was part of the original 26,530-acre Rancho Nuestra Señora del Refugio Mexican land grant to former Santa Barbara Presidio Commandant Jose Francisco Ortega in 1827. The adobe house was built in 1842 by the Ortega family and was used as a stagecoach stop on the route between Lompoc and Santa Barbara in the late 1800s.

As the railroad and highway were being constructed, the adobe also served as a bar and eatery for the workers. Historic photos show a small schoolhouse where children along the Gaviota Coast came to school.

The canyon was also known to be a refuge for several well-known outlaws including Joaquin Murrieta, Jack Powers and Judge Edward McGowan and a vineyard site for the Santa Inez Mission Padres.

Mission-era grapevines still grow among the tall Sycamore trees in the lower canyon. Jennie B. Hollister purchased the ranch from the Ortega family in 1908, and her family held the property until the Land Trust purchased it in 2001.

Everyone is welcome to visit the Preserve to hike, picnic, paint, volunteer or do research but advance reservations are required. The Preserve is open the first and third full weekends of each month, and every Monday and Wednesday for school and community groups. Free nature hikes with one of our knowledgeable docents are held at 10:00am on Saturday and Sunday of weekends that are open to the public.

Please make your reservation with the Arroyo Hondo Preserve Managers at arroyohondo@nullsblandtrust.org or by calling (805) 567-1115.

Article by Chris Chapman in the Independent

Sorry, no records were found. Please adjust your search criteria and try again.

Find awesome listings near you!